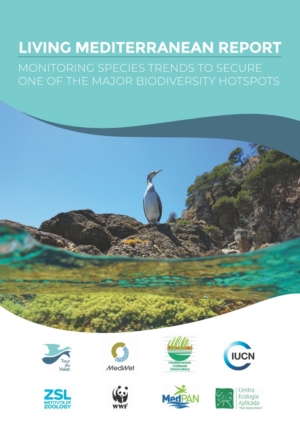 Thanks to the meticulous work carried out by a team of the Tour du Valat , the Living Mediterranean Report presents the most complete synthesis ever carried out on the evolution of the biodiversity of Mediterranean vertebrates since 1993. The main results of this report are presented here.

The Mediterranean Basin, a hotspot of biodiversity

Covering an area of more than 2 million square kilometres, the Mediterranean Basin is a vast region that harbours an exceptional biodiversity. This species diversity and its high rate of endemism makes it the second largest biodiversity hotspot in the world. This biodiversity represents the natural resources that have enabled human societies to prosper for millennia in the Mediterranean. However, over the last decades the rate and scale of human activities have had a devastating effect on ecosystems in the region. 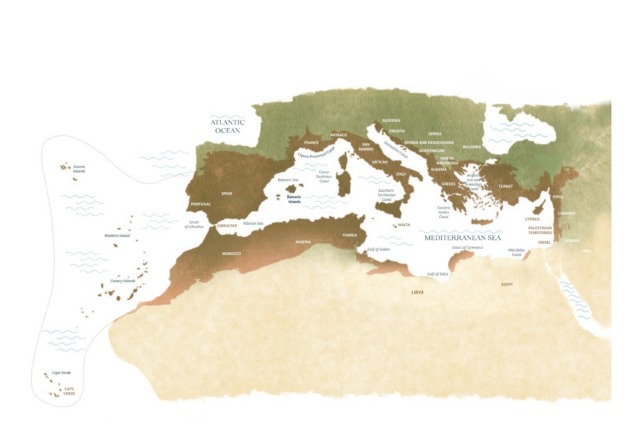 With this large volume of data, it was possible to calculate the Living Planet Index (LPI) of the Mediterranean region. The LPI is an indicator which tracks the trends in abundance in animal populations over time. This abundance index can therefore show us the evolution of Mediterranean biodiversity since 1993 – the year the Earth Summit in Rio took place where a large number of states agreed to engage in efforts to conserve biodiversity.

The results – biodiversity in decline

Unfortunately, nearly 30 years later, the results are alarming. The LPI indicates a 20% decrease in abundance of vertebrates in the Mediterranean between 1993 and 2016. This result is an average with certain animal populations increasing during this period, others decreasing – but ultimately the declines surpassed by far the increases.

The LPI was also calculated for the three main biomes in order to have gain deeper insight on the state of biodiversity in the different ecosystems of the region. 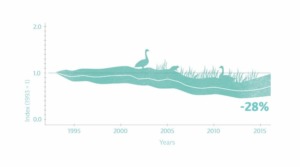 Freshwater ecosystems indicate a 28% decrease in animal populations. With the exception of water birds, all taxonomic groups show a sharp decline in their abundance. 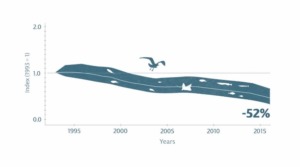 The ecosystems with the most dramatic decline – 52% of marine populations are in decline. Fish populations in coastal and pelagic zones are particularly affected. 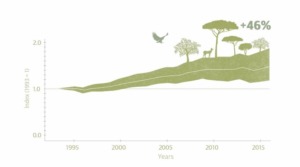 Terrestrial ecosystems are the only ecosystem to show positive trends with an increase in vertebrate populations of 46%. However, less data was collected for these ecosystems, especially in the Southern and Eastern regions of the Mediterranean Basin. It is therefore necessary to do more research on terrestrial taxa throughout the Mediterranean territory in order to have a clearer picture of the state of biodiversity in this biome. 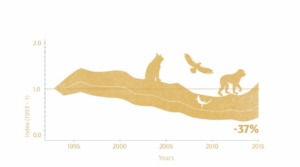 Worrying trends for endemic species in the Mediterranean Basin

More than a third of species are endemic, that is to say that they are present in the Mediterranean Basin and nowhere else in the world. The LPI shows than on average the populations of endemic species are decreasing rapidly (-37%), with endemic amphibian populations being strongly affected.

The main threats to Mediterranean species were assessed using another indicator of biodiversity – the IUCN Red List. The human activities contributing to the degradation of the state of biodiversity are classified as direct threats. The direct threats with the greatest impact in the Mediterranean were grouped following the IUCN threats classification scheme (version 3.2; IUCN, 2020):

[1] Dehesas : extensive pastures where the trees have not been cut. The cattle maintain a very sparse undergrowth while taking advantage of the shade that allows humans to exploit the trees and wild plants.

The root causes of biodiversity decline

While direct threats have an obvious impact on biodiversity loss, the driving forces behind them, named indirect threats, are not always so visible. Notably, they are linked to our institutional and socioeconomic models, models that do not respect our environment enough.

In the Mediterranean Basin some of the pressures are demographic, with 500 million residents and a further 360 million tourists every year the region is very densely populated. 70% of this population lives in urban areas and is concentrated near the coasts and major rivers. The Mediterranean countries have also mainly invested in economic sectors with strong impacts on the environment: mass tourism, intensive agriculture, maritime transport etc. The result of this are more green gas emissions than the global average, high levels of marine pollution and the overexploitation of water resources. Unfortunately the large contrast in economic situations between the northern and southern shores as well as endemic political crisis explains, in part, the lack of investment and legislation when protecting nature is concerned.

Despite a general decreasing trend in biodiversity over the last decades it is still possible to bend the curve of biodiversity loss in the Mediterranean. The  designation of protected areas, the restoration of degraded ecosystems, the control of harvesting/hunting of animal and plant species, the integrated management of territories or waterways, reintroductions to strengthen the populations of threatened species… These conservation measures have already proven to be effective – cases such as the Dalmatian Pelican, the Atlantic Tuna, the Loggerhead Turtle, the Peregrine Falcon, and the Alpine Ibex show that it is possible to save species from extinction and even make them prosper again. Reinforcing these measures as well as an evolution of our socioeconomic models are levers that we must put to action rapidly to safeguard the biodiversity in the Mediterranean Basin. It is therefore our responsibility, political decision makers, private sector, civil society, scientists and citizens, to implement solutions to preserve this exceptional natural heritage.

The Living Mediterranean Report can be downloaded here.

It was produced with support from the French Ministry of Ecological Transition, the TotalEnergies Foundation, and the MAVA Foundation, in partnership with the Centre for Mediterranean Cooperation of the International Union for Conservation of Nature (IUCN), the World Wide Fund for Nature (WWF), the Mediterranean Marine Protected Areas Network (MedPAN), the Mediterranean Wetlands Initiative (MedWet), the Centre for Applied Ecology of the University of Lisbon, and the Zoological Society of London. 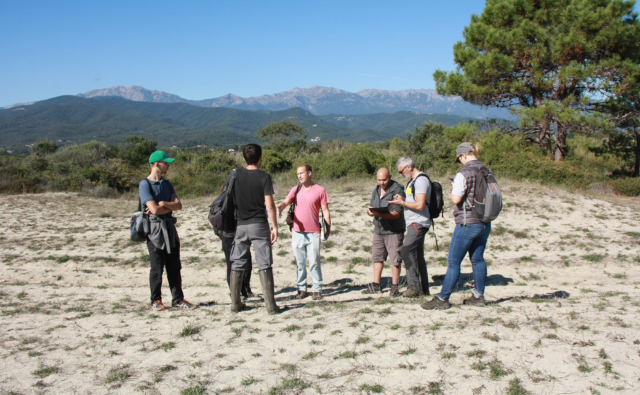