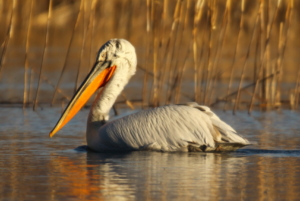 Prespa transboundary Park (PTP), a two lakes system (Lesser and Great Prespa) shared between Greece, North Macedonia and Albania is a biodiversity hotspot of the Balkan Peninsula. Hosting a great number of habitats as well as threatened species it has attracted the interest of conservation biologists and ecologists for many years. During the last 35 years, large scale vegetation changes took place within the reedbed communities of Lesser Prespa, with narrowleaf cattail (Typha angustifolia L.) encroaching within beds of common reed [(P. australis (Cav.) Trin. ex Steud.], threatening the long term conservation of Dalmatian pelicans (Pelecanus crispus Bruch, 1832),which has its largest colony in the world at PTP.

To identify the causes behind this change, as well as to determine the ecological niches of both plant species twenty-eight transects were established in the study area. Structure of the reedbed (density, diameter and height of T. angustifolia and P. australis), nutrient contents of the shoots of both species, species composition of vegetation and environmental variables (soil nutrients, water depth) were assessed. Although some statistical differences were found on individual variables between T. angustifolia and P. australis stands, the ecological niche of both species appeared to be very similar on the study site and no variables under study could explain Cattail encroachment. Water level alone could not explain the distribution pattern of Cattail and Reed, while the species composition of the stands was independent of the dominant helophyte species. Stochasticity, viz. the combination of climatic extremes events and wildfires, remains the dominant hypothesis to explain Cattail encroachment.

A control experiment showed that the removal of the shoots in winter followed by flooding has a strong negative effect on the density and shoot diameter & height of P. australis. Monitoring the interface of T. angustifolia and P. australis patches has been initiated in order to test competitive interaction and to monitor the expansion of T. angustifolia.