The European eel is an emblematic species of Mediterranean lagoons, but it is also found in a wide variety of habitats. This species, with its complex and original life cycle, is threatened with extinction today. To ensure its preservation, research actions and management measures are being implemented within the framework of European regulations and national management plans. In this article, you will discover the exciting journey of this eel and the actions being carried out in the Camargue.

The European eel is a migratory species that breeds in the middle of the Atlantic Ocean, somewhere between the Azores and the Sargasso Sea in a place as yet unknown. From an egg hatches a transparent larva, known as a leptocephalus, which looks like a willow leaf. This larva crosses the Atlantic Ocean, towards the European coasts, in 200 to 500 days, drifting with the currents and in particular the warm Gulf Stream. After several thousand kilometres, as it approaches the continental shelf, the larva metamorphoses into a glass eel. During this first juvenile stage, the eel is still completely transparent, and at this time resembles a pine needle. The elver then sets off to conquer continental waters, where it will choose a territory to grow for several years.

Highly attracted by river plumes, elvers generally move into a coastal habitat such as an estuary or lagoon that is rich in prey for their spawning period. However, especially if densities are too high, they may choose to migrate further upstream. When there are no obstacles, an eel can migrate upstream up to an altitude of more than 1,000 metres. Areas with a lower eel density tend to produce more females than males, and vice versa. The eel thus colonises a very large territory that stretches from northern Norway to the north coast of Africa, and from the Azores to the Black Sea.

As soon as it arrives in continental waters, the elver starts to feed and gradually becomes pigmented. Once pigmentation occurs, it is known as an eel, and then, as it grows, as a yellow (or green) eel. If it is a male, its growth period will last from 2 to 15 years, and even more if it is a female—3 to 20 years. In the Camargue, in the brackish Vaccarès Lagoon, most males remain only 2 to 3 years, and females 4 to 5 years (Acou et al. 2003; Melià et al. 2006).

This long stay in a continental habitat has only one objective: to store up as much energy reserves as possible to swim out again to sea, so that it can make a second transatlantic crossing, this time in deep water, so as to reproduce. When it feels ready, the eel metamorphoses again to reach the silver stage. Stimulated by the endocrine system, a series of physiological changes take place including an increase in the size of its eyes and pectoral fins, the appearance of a lateral sensory line, a thickening of the skin, and change of colour, which prepare the eel for its return journey.

Most often, it is during the autumn floods that the silver eels return to the sea: this is their downstream migration. In lentic systems (with slow or no circulation), their spawning seems to be linked to changes in water level (Trancart et al. 2017).

The European eel is a panmictic species, which means that all individuals come from the same breeding area. It is a long-lived species: several years of growth are necessary for it to reach the silvery stage, return to the sea, and engage in breeding. The eel is also semelparous, meaning that it can reproduce only once in its lifetime. At present, the origin and quantity of silver eels contributing to the spawning stock are unknown. As a result of these characteristics and the sharp decline observed since the 1970s, the European Eel has been listed as “critically endangered” since 2008 by the IUCN (International Union for Conservation of Nature). Since 2007, national eel management plans have been set up in accordance with European regulation (n°1100/2007) in order to learn more about them and be able to protect eels better.

The Vaccarès hydrosystem, an index site to monitor the status of the eel population

The Vaccarès hydrosystem is one of the index sites selected by the French Eel Management Plan to monitor the state of the European Eel population. This plan and the Rhone Mediterranean PLAGEPOMI (management plan for migratory fish) set objectives for monitoring recruitment and escapement.

In the Vaccarès hydrosystem, elver recruitment is essentially done via the Fourcade inlet, the main connection to the sea where a strong attraction for elvers is generated by the discharge of wastewater from Saintes Maries de la Mer. Glass eels can also enter the system via the Rhône pumping system, which irrigates all the agricultural plots in the delta. Elvers have been able to swim into the Vaccarès Lagoon since the 2010s by taking new routes to the sea via the ponds and marshes of the Camargue saltworks (Figure 1).

Scientific monitoring is carried out over the long term, or only for a few years, in order to study elver recruitment at different points in the Delta (Figure 1). In particular, since 1993, monitoring of elver recruitment, using 1.5 mm mesh nets, has been carried out one week a month, from September to June, at the Capelière station by the Tour du Valat, in partnership with the National Nature Protection Society (SNPN) / Camargue National Reserve (RNC). Since 2004, a glass eel trap, managed by the association Migrateurs Rhône Méditerranée (MRM), has been used to monitor glass eel recruitment at the Fourcade inlet. This monitoring enables the long-term trend in recruitment to be monitored and data to be acquired to better characterise the influence of environmental parameters on recruitment.

Since the 2000s, annual recruitment peaks have remained at very low levels compared to those observed previously (Figure 2). This result reflects the situation observed at the European level (ICES/WGEEL European index). (For more information, please see the report available online on the MRM website).

A current project is attempting to characterise the dynamics of elver recruitment at different points in the Camargue Delta. Colin Bouchard, a postdoctoral student on this project, is developing Bayesian models that enable recruitment flows at the different inlets of the delta to be compared. For each station monitored, the models enable a better understanding of the existing environmental effects. In this way, management measures aimed at promoting the ascent of elvers can be designed at complementary spatial scales.

When it is silvery, the eel is ready to return to the sea. It begins its downstream migration when the environmental conditions seem to be the most favourable.

Based on data acquired by the Tour du Valat between 1993 and 2009 in the Vaccarès Lagoon, a mathematical model was developed to assess eel stock in relation to recruitment, fishing, and water management measures (Schiavina et al. 2015, www.eelmanagement.eu). This tool can be applied to different aquatic systems such as lagoons, lakes, and rivers, and it enables conservation measures to be tested according to different management scenarios. It enables the abundance of eels by stage (yellow or silver) and the escape rate to be estimated over an annual time step. However, this model cannot be used to characterise downstream migration dynamics or to determine the environmental factors that may influence it.

In order to better characterise this downstream migration, a pilot study was launched in 2019 on the Fumemorte basin (Camargue), where the eel population has been monitored monthly since the early 1990s. Before going further, let’s see how this system works and how eels have been monitored there until now.

The Fumemorte hydrographic basin has an artificial functioning: it is mainly fed by water pumped from the Rhone for agricultural irrigation from April to October. Its waters flow gravitationally into the Vaccarès Lagoon. Elvers settle there for their growth arriving either through the Vaccarès Lagoon or through the Rhone pumping stations. Generally speaking, eels are more mobile at the elver stage, when they are looking for a place in which to settle, but also at the silver stage, when they are trying to escape from the system and return to sea. A study of otoliths, small calcified pieces found in a fish’s head, has shown that some individuals make one to several migrations between the Vaccarès Lagoon, a more salty habitat, and the Fumemorte canal during the yellow stage (Panfili et al. 2012). It is therefore necessary to better understand their movements within the Fumemorte basin.

In the Fumemorte canal, the main drainage channel of the basin managed by the Association Syndicale Autorisée (ASA), several sampling sites are monitored at the Tour du Valat regional reserve, including one on a monthly basis since 1993. All eels caught using  fyke nets are measured and weighed in order to be able to precisely determine their stage of development on the basis of the EELREP index (Durif et al. 2005): sexually undifferentiated, resident yellow females, pre-migrating yellow, silvery females, migrating silvery females, and migrating silvery males.

Since 2001, the Fumemorte eel population has been monitored by capture-mark-recapture: all individuals longer than 180 mm captured are marked with a 6mm-long transponder. Some individuals are recaptured more than 11 years after their first tagging. These recaptures are of interest for monitoring the growth of individuals, changes in their condition and silvering, and for developing population dynamics models.

In order to track the movement of yellow and silver eels more precisely and to optimise the chances of recapture, RFID (Radio-Frequency Identification) telemetry tracking has been set up (Figure 3). Eels larger than 30 cm are equipped with 23mm long transponders that carry a unique digital code. The individuals thus tagged can be individually recognised and recorded when they pass through an antenna that emits a magnetic field (RFID listening system). The canal has been equipped with fixed listening stations in two locations, one in the heart of the area where the individuals are captured and tagged, and one near the mouth of the Fumemorte canal.

The aim of this RFID telemetric tracking is to continuously monitor the longitudinal movements of the tagged eels within the canal, and thus to better identify and quantify the environmental factors that affect the eels’ movements, and in particular those that trigger the downstream migration. This study is a pilot study, which allows the effectiveness of RFID technology to be tested under variable salinity conditions and at relatively high depths for this method. It is planned to extend this project in the near future in order to monitor the downstream migration of silver eels throughout the Grande Camargue. In particular, new listening stations will be installed at the 2 main connections of the Vaccarès system to the sea. Given the large surface area of the system, this project will require a large-scale tagging operation and the collaboration of numerous partners. This project will make it possible to identify the factors initiating the downstream migration, and to better estimate fishing mortality and natural mortality (in particular, predation).

Discovering the journey of eels in images

The film “The Great Travellers of the Mediterranean Lagoons,” produced by the association Le Gobie, follows the audacious journey made by eels and the environments through which they travel. It also showcases the Tour du Valat’s eel-monitoring activities. Enjoy your trip! 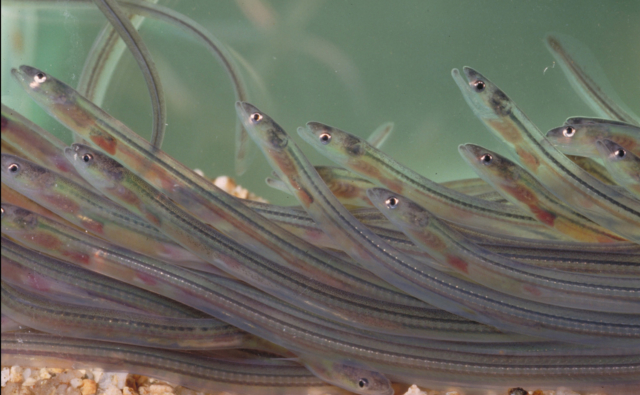 Population dynamics of European Eel in the Vaccarès lagoon hydrosystem