On the site of the Camargue Saltflats lagoons and marshes, currently being purchased by the Conservatoire du littoral (French Coastal Protection Agency), the management methods being set up are intended to restore the functionality of the lagoon habitats, taking into account coastal dynamics, the conservation of colonial waterbirds, and the regulation of human activities.

A vast coastal area being purchased

In the framework of several deeds of sale signed since 2008, the Conservatoire du littoral (French national coastal protection agency) has acquired 6,527 ha of lagoons previously used to pre-concentrate saltwater for the Salin de Giraud saltworks on the southern edge of the Camargue. These purchases could not have been made without the help of the State, the Rhône-Mediterranean-Corsica Water Agency, the European Union (FEDER), the Provence-Alpes-Côte d’Azur Region, and the Bouches-du-Rhône Department. An agreement protocol signed with the Compagnie des Salins du Midi provides for the eventual acquisition of 8,000 ha of land, bringing together all the lagoons and land habitats situated between the new salt production area and the territory of the Camargue National Reserve. This transfer, which was requested by the Compagnie des Salins du Midi, is occurring in the context of the objective of halving salt production on the Salin de Giraud site due to reduced demand from the chemical industry.

The joint management of the Camargue Saltflats lagoons and marshes has been entrusted to three organisations with complementary domains of expertise: the Camargue Regional Natural Park (coordinating body), the Tour du Valat, and the Société Nationale de Protection de la Nature (SNPN). 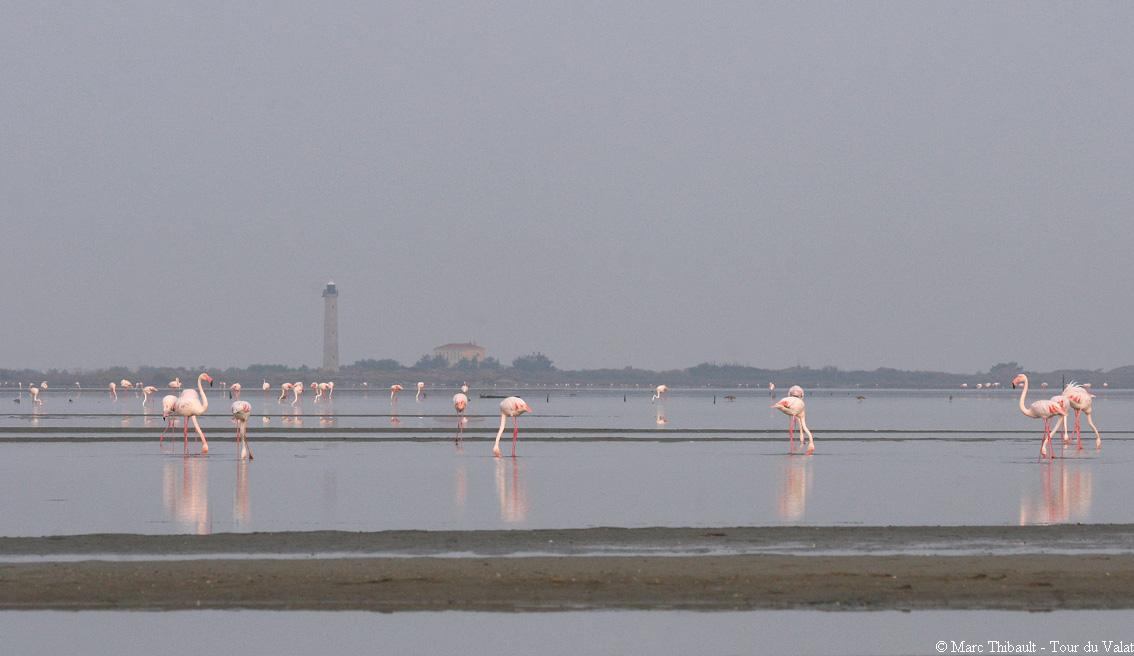 The presence, on the Fangassier lagoon, of the only breeding colony of Greater Flamingos (Phoenicopterus roseus) in France has greatly contributed to the international reputation of the site. However, it has many other biological riches. With 22 natural habitat-types of Community interest, it is now the protected site with the broadest diversity of natural heritage habitats in the Rhône delta. There are exceptional areas of dune habitats (more than 300 ha), characterised by a remarkable diversity of plant formations, in particular mobile dunes with Marram Grass (Ammophila arenaria), and grey dunes fixed by formations of crossworts Crucianella, Sticky Wormwood (Artemisia campestris ssp. Glutinosa), and Sea-Grape (Ephedra distachya), together with dune grasslands, pine stands, and low marsh. The surveys being carried out have identified more than 250 plant species, 18 of which are protected. A series of freshwater marshes located on the former course of the Rhône harbours a major population of European Pond Turtle (Emys orbicularis). Finally, more than 280 bird species have been observed (out of a total 566 species observed in France, i.e. almost 50%), the majority being migratory or wintering. 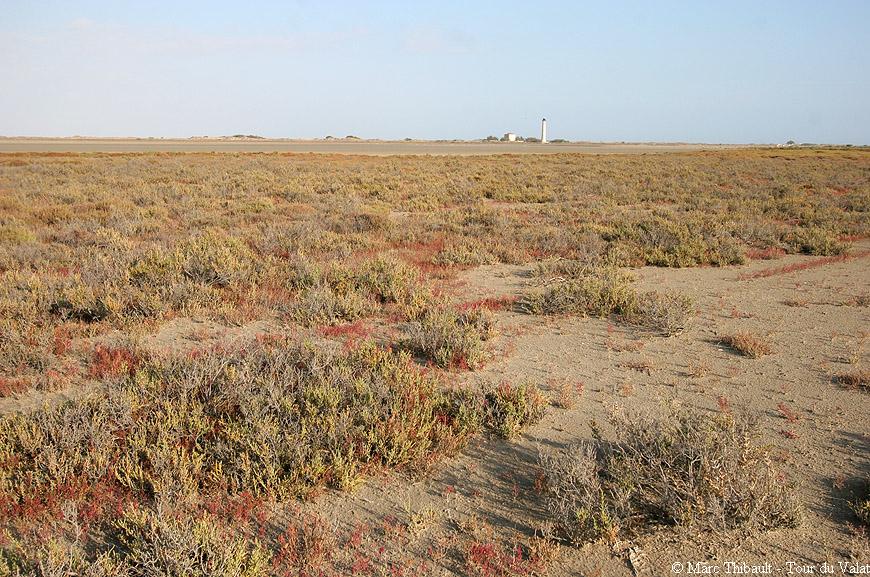 The areas now owned by the Conservatoire du littoral (Cdl) were dyked up during the 1950s to 1970s and converted into salt pans. These modifications transformed some of the lagoons into a hyper-saline ecosystem, with their aquatic fauna limited to certain invertebrate species adapted to such extreme conditions. The inflow of saltwater into the higher areas led to the disappearance of vast sansouïres (a particular type of salt meadow), at the same time creating attractive conditions for colonial waterbirds. With the overall reduction in salt production at Salin de Giraud and complete cessation on the sites acquired by the Cdl, together with the dismantling of pumping stations by the Compagnie des Salins du Midi, the global hydrological regime of the site needs to be completely reconsidered. The circulation of water is once again entirely gravity-driven, with less predictable water levels. Breaches in the dykes are proliferating in the sectors subject to erosion, re-establishing hydraulic and biological exchange between the sea and some of the lagoons. The consequences of these recent changes for the fauna and flora are already noticeable, with the establishment of submerged meadows of Dwarf Eelgrass (Zostera noltii), for example, and the arrival of migratory fish (e.g., eel) in the Beauduc lagoon.

The Conservatoire du littoral is under the obligation of establishing a management plan for its site once it becomes a coherent entity. This plan will therefore be drawn up after the purchases have been finalised. In the meantime, the transitional management approach being implemented is based on a simplified document: the management guidelines. The guidelines were proposed by the joint management bodies and validated by the Cdl in March 2013. They give an initial set of responses to the issues identified on the site, defining long-term orientations and a three-year action programme. They thus provide a framework for orienting and ensuring the coherence of management methods for the next few years. 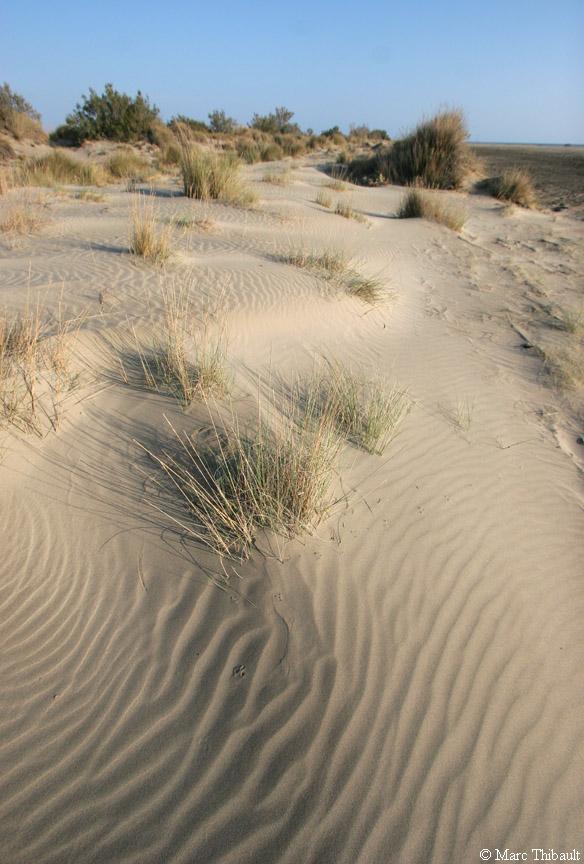 With regard to the erosion occurring to part of the former saltworks area, and given that there are no socio-economic issues on the site to justify the expense of artificially maintaining the coastline in its current position, we are presented with an opportunity, rare in France, to preserve or even reinforce the wildness of the coast. The orientation chosen in the management guidelines is therefore to accept the long-term evolution of the coastline, including the sectors in which there is natural erosion. An essential component of this management will be the protection of the dune cordons from destruction by vehicles and tourist activities. In the short term, the actions proposed are intended to limit the impact of these activities, notably by creating car parks near the entrances to the beaches, drawing up a traffic management plan, informing users, and carrying out a feasibility study concerning setting up public transport between the village of Salin de Giraud and Piémanson beach.

With regard to water management, the objective proposed by the management guidelines is to augment the hydraulic and biological exchanges between the various lagoons on the site, and also with the Vaccarès hydrosystem and the sea. These reconnections require the restoration of old sluice gates and the creation of new ones, together with channel clearing work. They also involve dealing with the problem of pesticides in the waters entering the Vaccarès hydrosystem. Otherwise this contamination will spread throughout the lagoons and former saltworks. There is a concertation process underway involving the Cdl, the site’s joint management organisations, State departments, the bodies responsible for managing the canals, and rice-growers, in order to find concrete solutions for halting this pollution.

The management guidelines also plan for developments to ensure the continued breeding of Greater Flamingos, and to restore favourable conditions for the breeding of colonial Charadriiformes (waders, gulls, etc.).

Finally, the site and its surroundings are subject to human pressure, with numerous professional and leisure activities. It is therefore essential to take into account these uses and, when necessary, make them evolve towards practices in line with the Cdl’s conservation objectives. Another orientation in the management guidelines is to encourage new economic activities, again provided they are developed in accordance with the sustainable conservation of the site.

As a joint management organisation for the Camargue Saltflats lagoons and marshes, the Tour du Valat provides its skills and expertise for the management of the site. In particular we carried out an initial assessment of the ecological status of the site, and are involved in the surveying and monitoring of the fauna and flora. We contribute to the hydrological monitoring of the lagoons, and have initiated a hydrological modelling project. In partnership with the Camargue Regional Natural Park, we are stakeholders in the European project LIFE+ MC-SALT aimed at ecological restoration and development works for bird colonies.

Map of of the Camargue Saltflats lagoons and marshes