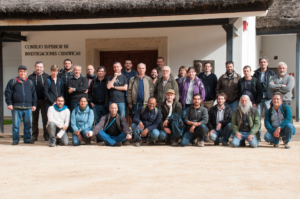 The first international workshop on the Glossy Ibis took place from 27–29 November 2017 in Doñana, Spain.

Organised by the Doñana Biological Station (Andalusia) with support from the Tour du Valat and the International Union for the Conservation of Nature (IUCN) Stork-Ibis-Spoonbill (SIS) Specialist Group (learn more [1]), researchers from 14 countries were able to attend this workshop. Some of these specialists came from Azerbaijan, Serbia, and Tunisia thanks to a system of grants funded by the Tour du Valat.

In one of the talks, Jocelyn Champagnon, who is the co-manager of the long-term bird monitoring programme in the Camargue, established the historic and current situation of the Glossy Ibis in France. He also presented the initial results stemming from the ringing operations of this species that are conducted every year in the spring on the colony in the Scamandre lagoon in the Gard (learn more [2]).

Arnaud Béchet, who heads the Tour du Valat’s Greater Flamingo programme [3], presented the ‘Flamingo network,’ which has proven to be an example to follow for the creation of an international network of Glossy Ibis specialists.

The different talks described the processes of colonisation and exchange between the colonies of this species, which is present on all continents. Simone Santoro from Pablo de Olavide University was appointed as the coordinator of this new group of specialists, which will be a subgroup of the SIS Working Group. Global genetic analyses will be conducted. Ringing programmes in different Mediterranean countries will also be set up, and a standard protocol for bird censuses will be used.

The annals of the research presented will be gathered in a first issue of an on-line journal of the IUCN SSC (Stork, Ibis and Spoonbill Specialist Group) (read more [4]), which will be published in the spring of 2018.